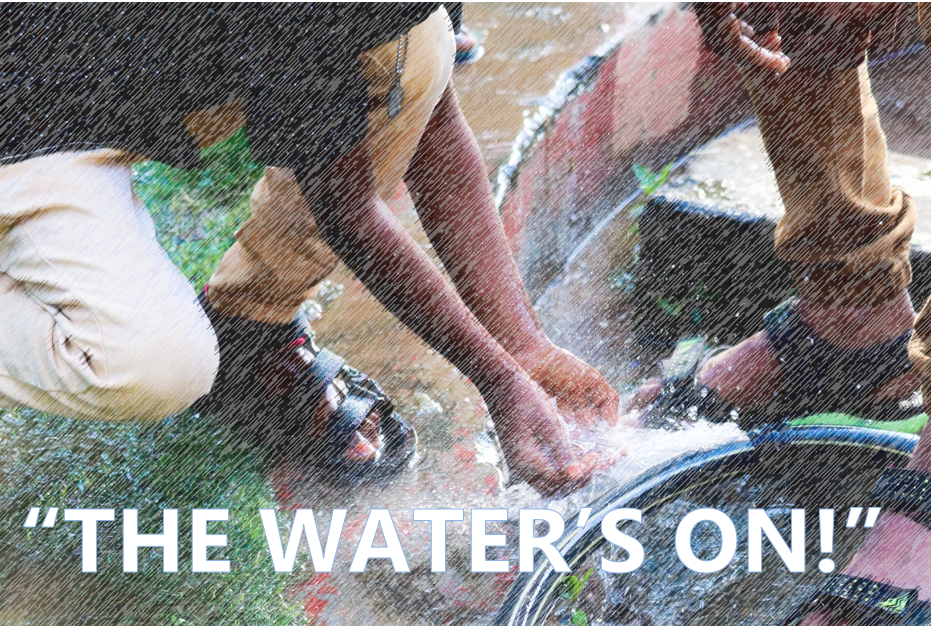 What can you not live without, is starting to become tainted most everywhere you look, yet you expect it to be available to you at any given moment? WATER. Let me rephrase that- CLEAN water.

March 22 was World Water Day. I’ve looked at water as a parallel to land in regards to Mark Twain’s famous quote, “Buy land, they aren’t making it anymore”. Now, I’m not saying, “Buy water, they’re not making it anymore”, but I am saying there is a reason to invest in making clean water available. As I’ve recently seen it put, “clean water is scarce, in a world of excess where most everything is in oversupply”.4 What does that tell you?

A dear client of mine named Sara had retired back in 2008 to join the Peace Corp. She was sent to Peru where she stayed with two different host families, located in different areas of Peru. Of the two area one was more urban. At that home her host family had a big black 300 gallon tank on their roof that was filled two times per week with water. This home was lucky enough to have water trucks come by and refill the roof tanks (at a cost, of course). This was supposed to be enough water for the 4 adults and 4 children that lived in that home. That only allows for 75 gallons of water per week per person in the household. This is eight times less than the average American household uses.1 This wasn’t necessarily potable water, it still needed to be boiled for Sara to drink it but she could take a cold shower every morning and the toilet was flushed regularly. The water there was loaded with parasites that the family had developed some sort of tolerance for, yet they were always battling chronic parasites. When Sara moved on to her second host-family’s home she found there were random open pipes around everyone’s homes. This particular family had 12 people living in their tiny house. About twice a week, water would begin to run through the pipes and people in the neighborhood would run around yelling, “THE WATER’S ON!”. That’s when the households would gather up their 5 gallon buckets to fill their 50 gallon water barrels. What’s worse is that sometimes this happened early in the morning; Sara remembers it once being 3am. The water was “crude water" and was taken from the nearby Tumbes river. This was filled with chemicals, animal waste, and ag runoff. She had been teased for not being able to drink that water out-right like the locals could. Again, they never knew when the water would be on again, usually it would be two times per week, sometimes three. This home happened to be in a rice growing area, so in times when the rice fields were being flooded the water came even less frequently. To help the family ease the burden of her water-needs she paid for the family to add a second tank, but even then toilet flushing was limited to only two times per day, despite their flushing with waste water from tasks like clothes washing. She was allotted a gallon bucket of water every day so she could take a cold “bath” and she was able to wash her clothes one time per week in a big bucket washtub. She remembers how laundry washing occurred. If you used soap you could never fully wash it out of the fabric, there just wasn’t enough water for it to be spared for such a frivolous reason. You also couldn’t “waste” the water on washing your hands. A question from one of her host brothers still haunts her, he asked, “You’ve got a pipe in your wall that gives you water any time you want to drink?” She didn’t have the heart to tell him it was also used for bathing, dish washing, and other every-day tasks.

Whether you’re a believer in climate change or not, the hydrological cycle has been changing and therefore increasing flooding, severe hurricanes and droughts. I’m usually of the mindset that if a little of something is good, then a LOT of a something is even better. But, that’s definitely not the case here. These extremes are causing not only a limitation to our clean water supply, but it’s affecting the spreading of disease, and adding more pollution.

Unfortunately it seems we’re getting used to seeing these extremes: flooding, hurricanes, and other water-related disasters, but what we forget is that not only are those disasters bad for humanity, they are also bad for our clean water supply. Hurricane-flooding is responsible for more water pollution than you may think. Garage items like cleaning solvents, paints, pesticides, fertilizers, motor oil and other harmful products get swept away in the waters. Some of these chemicals cause toxic algae blooms and excess bacteria that not only make the water unsafe to use, but it increases the price of treatments that make it safe to drink.2 Water-related disasters aren’t discriminatory, they don’t limit themselves to flood-zones, so places that should be kept far from stores of drinking water, like hazardous waste plants, industrial discharges, sewers, wastewater treatment plants, and swine and poultry farms, can be affected and contaminate on a large scale.3  What’s more is, our most vulnerable populations are most effected by such disasters. It’s been shown that communities with higher proportions of elderly, minorities, people with disabilities, unemployment and mobile homes are disproportionately affected due to their likelihood to live in neighborhoods or buildings that are more susceptible to storm shocks.4

Okay, so now you see the need for clean water. So back to that Mark Twain quote. Again, I’m not saying, “buy water”, but there is money to be made in making clean water available, and it’s not a need that will go away in our lifetimes.

Why would you invest in water? Water, similar to other commodities, has proven to be an effective hedge against inflation as water pricing has often increased at a rate in excess of inflation (which is something we all could use right now based on fears of increasing inflation rates).5 And, what’s more is it’s been shown to have relatively low levels of risk and volatility. 5 Plus, it is absolutely irreplaceable in terms of food and energy production, oil and gas development, manufacturing, mining, housing, and data storage.5  Water infrastructure is also in disrepair. US infrastructure spending has been falling for years, specifically since the 2008 crash. 6 This cannot continue much longer. As a result regulators worldwide are working on implementing supportive frameworks to attract capital to ultimately change course.

How can you invest in water? Aside from investing in individual stocks of companies that have water initiatives there are mutual funds and ETFs that are specifically focused on water. What that looks like is a focus on companies that manage water use in a sustainable manner, or companies that are actively engaged in expanding access to water, improving water quality, promoting efficient use of water, or providing solutions that address other global water challenges. Typically these funds invest in water treatment plants, desalination processes, aqueducts, and the like.

There are several options out there and the pool is growing. As I’ve mentioned in other posts, it’s common to find industry greenwashers, making it harder for the untrained eye to separate the wheat from the chafe. I recommend working with an advisor that is knowledgeable in Socially Responsible Investments (or ESG investments) as it’s not as simple as comparing historical rates of return. At Equanimity Wealth Planning and Investing, we’ve been focused on this area of the market since the early 2000s, and we would be glad to talk with you about this topic, or any other Socially Responsible Investing topic, for that matter!

*Sara Williams joined the Peace Corp as a volunteer in 2008