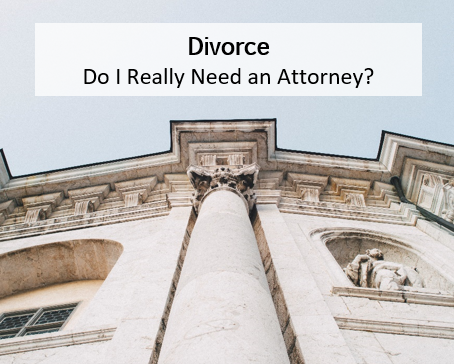 Divorce: Do I Really Need an Attorney?

Divorces are expensive- both financially and emotionally, and lately, as much as 80% of people going through divorce opt to do so without an attorney.1 That’s called pro-se divorce, and it might be more expensive than you think.

In the following instances, I firmly believe you need professional consultation and guidance.

The divorce involves minor children Any time a divorce involves children, you should absolutely consult with an attorney. In my opinion, this is non-negotiable. You will need a parenting plan and parenting schedule, where your child will live, and establish basic parenting rules for each other (such as: bedtime at 8pm, etc.) Divorce is hard, emotionally, for you and the kids. It’s best if you try to maintain some sort of normalcy for them as well as amicability with your ex. Without an attorney’s guidance the emotions and chaos can slip in even more than would otherwise, and all the while the child is brought into the middle of it.

You Need Spousal Support/Maintenance/Alimony This is another scenario when I feel having an attorney involved is non-negotiable. Though it may seem straightforward, dealing with spousal support is complicated. There is taxation of the maintenance payment to be factored for, time-value-of-money calculations that need to be made to determine long-term effects, and myriad of legal nuances that can be missed or misunderstood. Consultation with an attorney and a financial planner skilled in divorce planning is virtually irreplaceable.

You Need Protection from Being Bullied Into Settling I have a friend who did everything she could to quickly settle her divorce because it was emotional torture. Her husband was in law enforcement and had both a pension and a retirement plan through his employer. She opted out of taking her half of the retirement plan because she wanted the divorce to end. When we talked about it she said her ex’s retirement plan was enormous because he worked so many hours of overtime. I reminded her that when he was working the overtime hours, she was home with the kids. It wasn’t just him making the sacrifice, the whole family was making the sacrifice. In other words, ½ of that was hers. There’s nothing that can take the pain of divorce away, and there’s no doubt that pain could turn into long-term trauma. It’s not fair, I know. It’s uncomfortable, maybe even scary, I agree. But what you’re doing is avoiding short-term pain in exchange for long-term consequences. An attorney can help take out some of the emotion and is there for you, acting as your advocate. When you feel like you no longer have a voice, lean on them. That’s what they’re there for. Don’t let today’s pain cause more pain tomorrow.

You Own Real Estate Together The main issue I see here is the need for guidance on whether or not the home should be kept post-divorce, when best to sell it (pre or post-divorce) should you not be able to swing it financially on your own, understanding the implications of taxes upon the sale, and/or gifting ramifications. Many of my female clients have come to me post-divorce saying they kept the house, and in order to pay for it they made enormous sacrifices. It pains me to learn of this because once they’ve discovered they’ve made a mistake there is usually no turning back. If they turn around to sell they’re clobbered with taxes and pay realtor fee so they net-out considerably less than what they paid their ex for the house. And to buy-out their ex’s half of the home value they often liquidate retirement plans, so now they find themselves coming up short for retirement, too. No matter what, I encourage all people going through divorce to get consultation from either a divorce attorney or a financial advisor that specializes in divorce planning.

Your Ex Has an Attorney Again, divorce lawyers know the law, and likely, you don’t. That’s like showing up to a gun-fight without a gun. Don’t do it. At this point, there’s no question, you absolutely need representation.

You Can’t Afford a Delay Many do-it-yourself divorces end up taking much longer to divvy up the assets than would have been true with an attorney. I’ve seen divorcees try to split their employer-provided retirement plan without going through the proper channels, and the account division was delayed for several months (and even required the court to get involved). Delayed division of assets can mean losses in the stock market if the markets drop, or increased taxation if the asset is taxable to you and the investment continues to grow. Having someone guide you through the process helps ensure the process is done right the first time, so you can move on with life.

You Don’t Want to Risk Possible Error Again, divorce lawyers know the law, and likely, you don’t. Even if you think you do, until you’ve gone to school for a law degree for the additional years of training, I believe you don’t know enough of the law to play in this arena. What’s more is, attorneys know other professionals in the industry. They will likely be familiar with the opposing counsel and the judge.

When splitting assets, it’s not always a 50/50 split. You have to think about taxation of the assets, and not just taxation now, at the point of the divorce, but ramifications of future taxation. It’s more than just knowing the difference between a pre-tax retirement account and a post-tax retirement account. Many people aren’t familiar with the tax consequences of transferring assets such as the house, stock/bond investments (especially highly appreciated assets). Growth rates need to be predicted so you don’t end up with all the low-growth investments and your ex ends up with all the high-growth investments. I’ve also seen employer-sponsored retirement plans be split the wrong way, where the employee cashes out the portion going to their ex, therefore triggering taxation payable by the original owner. This could have been avoided if the asset was split correctly, through a court-ordered Divorce Decree, where the ex-spouse gets their portion as a transfer rather than via a tax-triggering event.

It’s not uncommon for people to forget what they have in terms of assets. I see it all the time when financial planning- we build a great plan only to remember sometime down the road there is a long-lost life insurance policy that was given to them by their grandparents when they were little, or a savings bond or two that were bought along the way. These oversights may seem harmless, but you’d be surprised to learn what can be missed when involved with a divorce. You’re likely already very stressed, so it’s entirely possible that you’re not working at your optimal potential.  What’s more is, it doesn’t always occur with a vindictive ex, it could happen with anyone! It’s just too easy for things to slip through the cracks.

Aside from the home, retirement accounts are often the next largest asset in someone’s portfolio. If either of you have a pension it is imperative that the correct valuation calculation be used to determine the appropriate split. Pensions are complicated vehicles. Pensions guarantee income for life, sometimes with built-in growth and/or inflation hedges. They require understanding of the pension rules and dynamics and accurate use of time-value-of-money calculations and reference to current mortality tables. You might also misunderstand the program altogether and mistakenly dismiss it as an unwanted asset, which means you’d be unknowingly foregoing one of the most valuable and most coveted assets someone can own.

In the end, it’s not my place to say you need, or don’t need, an attorney for your divorce. Maybe your divorce is very basic and simple, like one of my closest friend’s divorce. She was married young, they were both still in college when they got married and shortly after got divorced. They didn’t have any kids, were renting an apartment and had cars with loans. In essence, there wasn’t much there to negotiate. But, there are some tricky things that pop up and cause enormous repercussions that you don’t always realize until many years later. I’m not advocating that everyone needs to hire a lawyer to represent them, instead I’m advocating that all divorce at least include an attorney involved to some capacity, whether it just be to get a basic legal consult or more.

1 Divorce Statistics.info. “Info On Pro Se or Do It Yourself Divorce”. 5 May 2022. https://www.divorcestatistics.info/info-on-pro-se-or-do-it-yourself-divorce.html