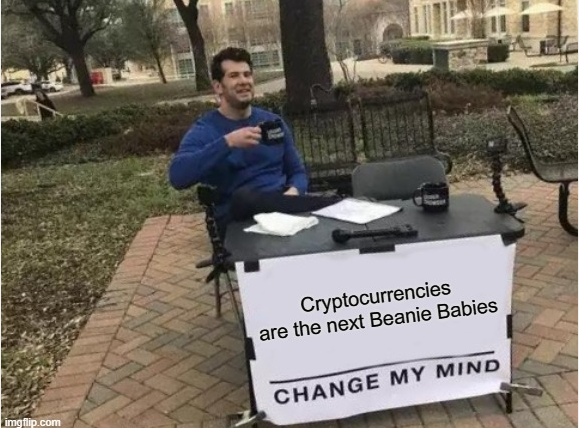 When I was in junior high my grandma gave us grandkids beanie babies for Christmas presents. I’d not heard of them yet but I was in junior high so I was a little old for them anyway. I kept them because, really, what else would I do with them? But then, when I was senior in high school I came across an ad in the Classifieds section of the newspaper saying someone wanted to buy rare Beanie Babies for good money. After a little research I found that my lady bug beanie baby had more spots than the normal version and therefore it was considered rare. I called the number in the classifieds and scheduled a time to meet up. The potential buyer was in her fifties or sixties and knew her stuff. She was definitely a collector. She offered me $125! Normally one would have enough sense to not say anything dumb at this point, but I was a kid and didn’t know better. I gratefully told her, “Wow, thanks! I figured it was time for me to sell it since the Beanie Baby craze is dying out”. She looked at me like I was crazy and said, “I certainly hope not, I’ve got an entire storage locker filled with them for my grandkid’s college education!” Oops.

Now, 20 years later and I looked on eBay today only to find a similar version being auctioned with zero bids at the low starting price of $0.99.

So what? So you scored a nice deal, what does that have to do with Bitcoin?

I’m going to quote my dad here, “Things are only worth what someone else is willing to pay for it”. Bitcoin, and other cryptocurrencies, are just that- only worth what someone will pay for them. Think about it, what is the true value of it? Nothing. Even in the end, a Beanie Baby still had some worth, it was made of fabric and little filler beans. Someone might look at that and think it’s useful in some way and therefore feel it’s worth paying money for. But at the end of the day, what value does a Bitcoin really have?

It turns out I was not the first person to think up this analogy. On January 12, 2018 Vitaliy Katsenelson, Investment Management Associates, Inc. CEO, had the same idea and wrote an article for MarketWatch.com titled Opinion: Bitcoin and cryptocurrencies are just the Beanie Babies of the moment.1 Wow, well, I guess great minds think alike?

Currently, as I write this, there are over 2,000 different cryptocurrencies in circulation.2 I ask you, what makes these worth something? What is truly backing up that currency? Also, what makes any of them worth more than the other? How would one even be able to research all the options thoroughly? It just doesn’t seem sensible.

This craze also reminds me of a headline I saw back around 2010 or 2011. In one of the industry periodicals I read had a story on how vending machines distributing gold were being placed around Dubai. That made me chuckle because the first thing I envisioned was a big, beautiful, bright gold bubble…POPPING. When fads morph into mania like this, where you just can’t live without going down the street and buying more gold just in case the price jumps again, it’s clear that a bubble is building.

Here’s a view of the historical returns for Gold taken from MacroTrends.net that shows the craze from an objective view.3 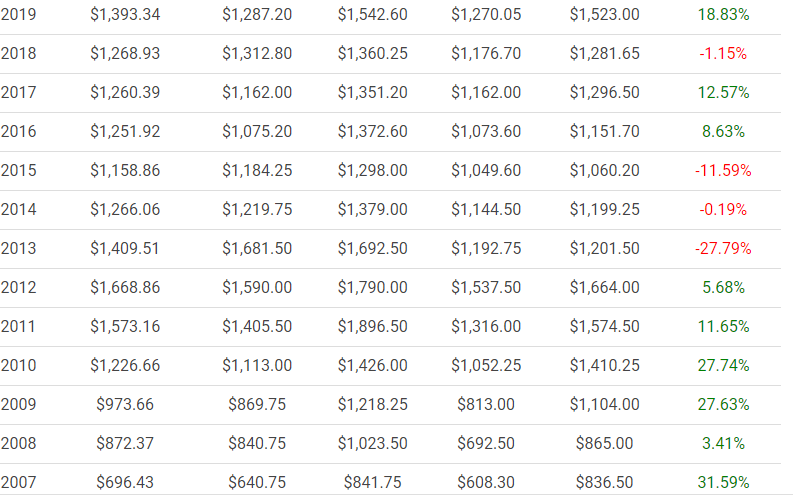 Look at the chart starting from the bottom going up. Gold started its upward trend right before the 2008 market crash due to many investors expecting a market drop. There was continued nervousness in the marketplace with many waiting for the other shoe to drop, which lead to more gold purchases. The price remained high through the crash and for the few years following it. Eventually it reached a period when people felt like it was a no-loss opportunity, and then in 2010 the gold vending machine was made to fill that “need”. The mania remained for a few more years but in 2013 a three-year downturn came, therefore popping that bubble.

In the end, I might be wrong. In fact, I might be terribly wrong and have missed out on one of the biggest investment opportunities of my time. But, I’m not going to let that fear influence me. I’m not the only one in the industry thinking this way, there are plenty of other professionals with this same philosophy. I leave the great ideas to the money managers because I trust their judgement. I’m here to help you fish through the pond of investments and utilize the ones that will help you reach your life goals- not just your dream of hitting the lottery.

1 Katsenelson, Vitaliy. Opinion: Bitcoin and cryptocurrencies are just the Beanie Babies of the moment. MarketWatch.com. 12 January 2018.